Thailand is home to many different species of primates but the most common monkey you’ll see when visiting is a macaques (pronounced “ma kak”), a small, grey or grey-brown animal that usually hangs out in trees or other foliage. The average Thai macaque is around two feet high and about 15 pounds but just because they are small it doesn’t mean they can’t harm you. In fact, macaques in Thailand can be very aggressive. According to a recent news report, about 600 people were treated after monkey attacks last year at Phi Phi island hospital alone. Authorities have even put up signs warning people to beware, but it doesn’t seem to stop incidents from happening

In Thailand they have been alternately seen as agricultural pests and sacred animals in some temples. Macaques live in social groups that contain three to twenty females, their offspring, and one or many males. The groups usually have fewer males than females. 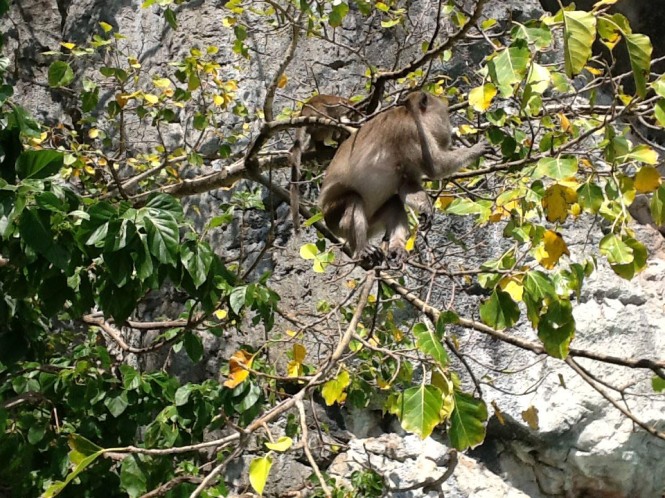 Elephants have played an important part in Thailand’s history and today the Thai elephant (chang Thai,) remains as an enduring symbol of Thailand. In bygone eras they were used in warfare, but more recently elephants were used as a beast of burden, particularly in the logging industry. The elephant also has special spiritual significance with its association with Buddhist and Hindu beliefs.

There are many ways tourists can experience interaction with these majestic creatures. One of them is the Mae Taeng Tour.

Mae Taeng is a district in the Chiang Mai province. Here you can explore the quiet serenity of the lush green mountains and truly experience the real Thailand. This is a safe haven for elephants to live in their natural jungle habitat.  Here you actually get to hang out with the elephants in the jungle! You’ll feed and shower them. You can even ride the elephants ‘bare-back.15% of the operators profits are given to support the citizens of the local community.

Thailand has a rich history and an equally rich art, craft and cultural heritage dating back hundreds of years. There have been various external influences to Thai art and culture including Asian and Western influence and these outside influences have become just a part of the fabric that makes Thailand what it is today.

Traditional Thai paintings showed subjects in two dimensions without perspective. The size of each element in the picture reflected its degree of importance.

Perspective was introduced only as a result of Western influence in the mid-19th century.

The most frequent narrative subjects for paintings were or are: the Jataka stories, episodes from the life of the Buddha the Buddhist heavens and hells, and scenes of daily life.

There is a contemporary art scene in Thailand which is centred around its capital Bangkok.  Many art galleries in Bangkok tend to sell work restricted to traditional rural motives. The artists creating this type of art are often influenced by traditional Buddhist beliefs and motives, and this art is popular among the general Thai public. Nevertheless, some Thai artists are breaking away from these norms by addressing more controversial issues in their works. Examples of these are the loss of traditional values and the obsession with money in today’s society.

Damnoen Saduak is the most popular floating market in Thailand, great for photo opportunities, food, and for giving you an insight into a bygone way of life. An early morning start is worth it to avoid the heat and catch Damnoen Saduak at its liveliest. The market is over an hour outside Bangkok, and the easiest way to get there is to join a tour.

Once there stepping off the boat, you find yourself amongst the busy stalls selling a variety of products small toy elephants, tiger balm and the compulsory ‘I was here’ T-shirts. It’s not surprising to find this at the most famous floating market in Thailand and it can feel a little commercialised but you you will also find the food-sellers, who not only look more photogenic, but also have some far tastier goods. Damnoen Saduak attracts many fruit sellers rowing their boats along the narrow canals, offering plenty of tasty food to try from freshly-made mini coconut pancakes to boat noodles in their rich meaty broth. 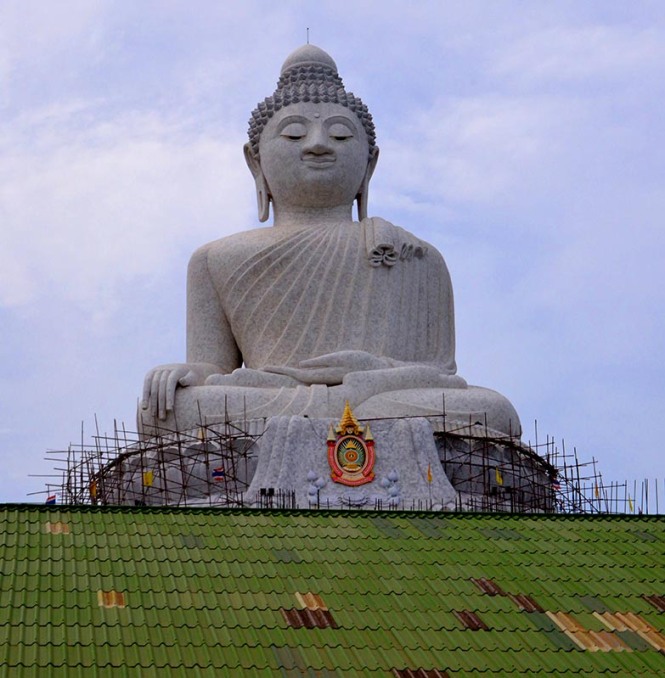 Always remove your shoes before entry to a household; it is considered rude not to do so in Thailand.

In Thailand temples play an important role in everyday life for Thai people. People go to the temple for merit making and praying to the Buddha for things such as good health, good fortune and wealth and to seek advice from monks. END_OF_DOCUMENT_TOKEN_TO_BE_REPLACED

Like motorcycle taxis, tuk tuks are usually used by residents for short distances.  When you know the price locals pay, you will be amazed at what they try to extract from foreigners.   Usually you would not hire these for long distances.  Requests to go long distance are an immediate signal to the driver to over charge as this is not their usual use by residents who know to use meter taxis or other conveyance for longer distances.

Many tuk tuk drivers make much of their money by taking tourists to a gem store, tailor shop, restaurant or the like where they get commissions for taking you there). They are very personable and they have an answer ready for any doubt you might have. This can be OK if you have the time and funds to throw away in the name of “experience” and need some overpriced custom shirts or jewlelry but otherwise you should avoid such trips.

With tuk tuk’s, visitors must negotiate the price before getting in. Trips with tuk tuk offers of over 50 baht should probably be taken by taxi or other conveyance.  Clarify on the map they will have handy as to where you want to go; to and make them hold to their bargain, before paying (when you exit the tuk tuk at the end of your trip).

1) BRAKE TAEK (Noodle Soup)
Serves a delicious and renown ‘Tom Yam Noodle Soup’. Here too, hard to get a table for lunch and you might have to wait quite a bit.

2) MEE TON PHO (Bhodi Tree Noodle)
Serving great noodle soups using… Instant Noodles! as well as some amazing porridge. Half the restaurant is full before they even can take the first order, so get ready to wait, but it’s worth it!

3) ANG SEAFOOD (Fresh Seafood)
It looks small and narrow, but once inside it’s much bigger than you think. Very popular among locals and always full (hard to get a parking).

4) MEE SIAM (aka LOKTIEN)
This very local food court was renovated not long ago and doesn’t appears as ‘old and dirty’ as it used to be (I kind of miss that). But they still serve their great food.

5) THAI POTHONG (Modern Thai)
Small and crowded, it’s an all time breakfast favourite, it is always full, no exceptions, you’ll have to wait for someone to finish breakfast to jump on their ‘not yet cleaned’ table or you’ll be missing it. 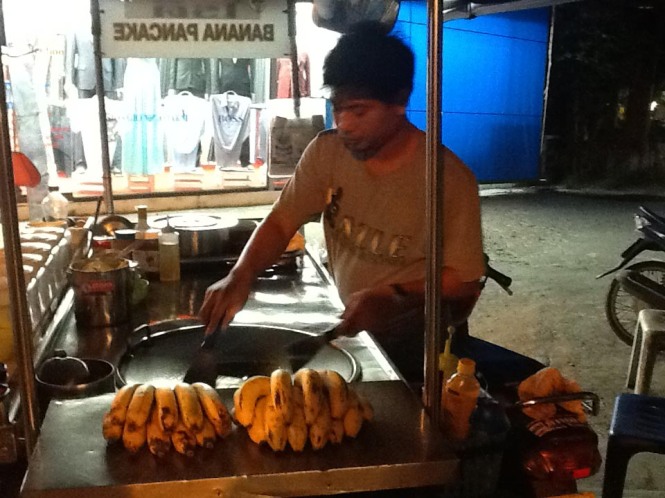 One of the best things about travelling in Thailand is the food. It is not only delicious, but it is also plentiful and cheap. In fact, you can find it on almost any street corner at any time of day or night. I guess you become spoilt in Thailand in having such easy access to Thai food. After all, one meal in a Thai restaurant in Sydney would probably be the same as the Thai weekly food budget. I know that is not really fair to compare as portion sizes in the West are far greater than what is served in Thailand. In addition, if you order say chicken curry in a Sydney restaurant you are actually going to get a fair amount of meat. Here you will probably get a lot of bone and a bit of meat! Basically you get what you pay for.

Eating well around the world

How to eat well anywhere in the world

The Forum for Travel Marketing Specialists